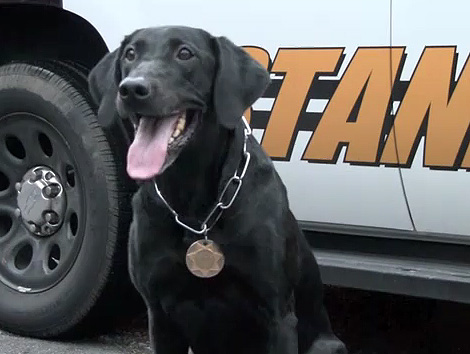 Seven years ago, a black Labrador named Red was born in a kennel in Arizona. At the tender age of six months she was purchased by a kennel in Oklahoma in order to be bred for duck hunting. She failed out, and in such cases it is not uncommon for a dog to be euthanized.

Fortunately, at that time a Menlo Park kennel was looking for a potential trainee for bomb detection and bought Red, sparing her from being put to sleep. A Honolulu police station had indicated the need for a bomb detection dog, so the Menlo Park kennel trained Red for the job. At the conclusion of her training, Honolulu informed Menlo Park that it no longer needed her, leaving Red, a trained bomb-search dog, with nowhere to go.

Fate smiled upon Red, and the Stanford University Department of Public Safety purchased her in 2007. Now, when dignitaries or politicians like the Chancellor of Germany, Arnold Schwarzenegger and the Dalai Lama visit Stanford, Deputy Red is on the front lines to protect them.

In a beautiful turn of events, a dog once saved has made a career of saving others.

14 thoughts on “Deputy Red: from and to the rescue”