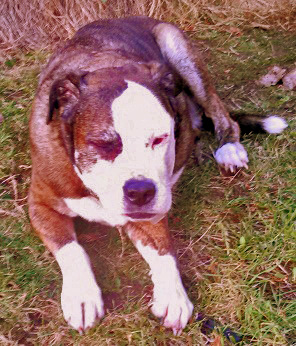 You always hear about dogs saving people and animals from fires, but it’s not often that you hear about a cat saving a dog from one. Or in this case, a CAT – Child Abuse Team – who came across a house fire, and without any protective gear, broke through a door and braved deadly smoke and flames to rescue the dog trapped inside.

Multnomah County, Oregon CAT detectives John Rasmussen and Thomas Walker were on their way to interview a subject in Portland when they noticed a house on fire.

A man was pounding on the door to alert anyone who was home. He did not know if anyone was there, but knew the homeowner had recently undergone surgery.

Walker and Rasmussen broke through a rear sliding glass door and entered. Flames were quickly consuming the home, and they called out to anyone inside.

No one was home but the family dog, Max. He was scared of the officers, but they soon gained his trust and got him out safe. Afterwards they called the fire department, who was able to extinguish the blaze.

The homeowner was summoned home, where they were reunited with their dog. The person reported that Max did not have any injuries, and was extremely grateful to the detectives for saving their buddy’s life.

“It is the first case of CAT saving a dog from a fire in recent memory,” stated a Gresham Police Department release.