Though most dogs are crated during flights and taken out to relieve themselves by baggage handlers, service dogs will have an easier time going at one airport:  Detroit’s Metropolitan Airport has just installed a puppy powder room.

Security checks are already a pain in the rump, and no one wants to go through that hassle to take a dog outside.  McNamara Terminal boasts a high number of connecting flights, so the airport and Delta Airlines teamed up to make traveling with dogs a little easier. 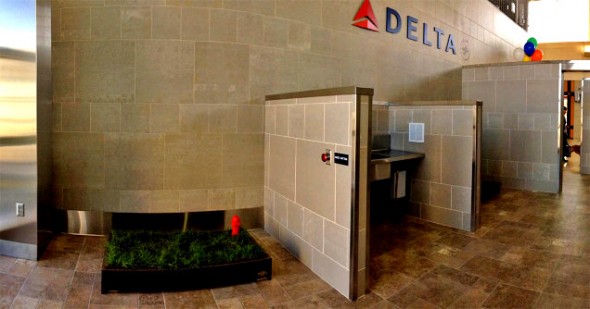 Though the dogs won’t be afforded the same privacy as people (most are hardly shy about peeing in public, anyway), they will have their choice of two grass yards.  One has real grass and the other has artificial turf.  There are even fake fire hydrants to help them feel more comfortable.

Once the dog has finished taking care of business, pop-up sprinklers are activated to wash away liquid waste.  The design leaves something to be desired, however.  Are owners responsible for disposing of the solid waste?  There doesn’t appear to be a garbage can nearby.

And for the $75,000 shelled out to create these boxes, they could have been a bit bigger, not to mention taller.  Most male dogs like to aim as high as possible to have the best chance of leaving their scent, so unless all service dogs are trained to squat, airport employees may have the unpleasant task of scrubbing down the surrounding walls and floor.

“It’s a wonderful convenience for our dogs,” said PAWS with a Cause Community Outreach Manager Deb Davis. “We want them to be as comfortable as possible, especially our service dogs, because quite honestly they are an extension of a person’s body.”