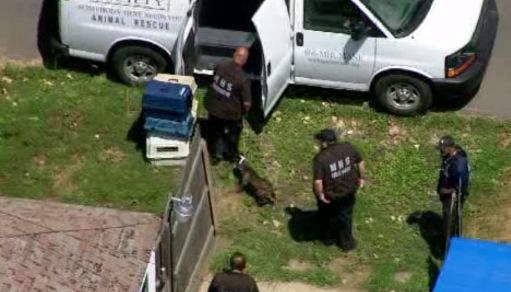 Detroit rapper Calicoe recently offered a video tour of his pad, and provided a look at his prized dog fighting operation in the process.

Barks and yelps can be heard in the background as the young music star introduces seemingly malnourished caged pit bulls as his “fighting dogs.” According to a very proud Calicoe, roosters kept on the premises are also being used for staging cock fights.

The video release caused an instant uproar; the rapper later denied that he fought dogs on Twitter. “If u find a video of me “FIGHTING DOGS” PLEEEEZE LET ME KNO,” he Tweeted.

Today, Detroit Police and the FBI conducted a join raid on the rapper’s home. The dogs were seized – and charges are expected to follow shortly.