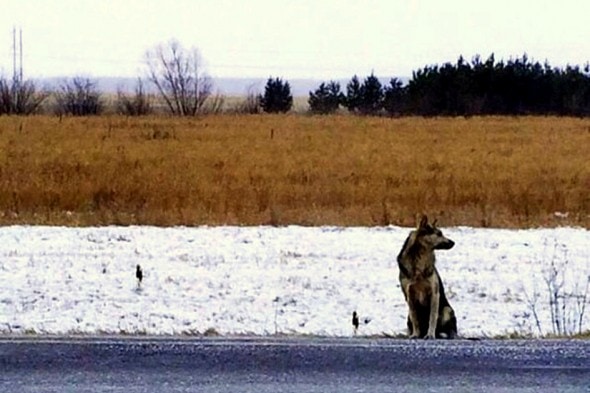 A dog in Siberia has been living outside for over a year, diligently guarding the spot where his owner died in 2014.  Though he hasn’t let anyone near enough to catch him, people do leave food out and have provided him with a shelter.

A car crash in 2014 claimed the life of the pup’s owner, and now he waits for his best friend to return.

“We haven’t been able to get anywhere near the animal,” animal activist Anastasia Selina told Central European News. “It only seems to want to get to its previous owner and as far as we know, they didn’t survive the car accident.”

Villagers from nearby Berkut have been leaving food out for the bereaved dog, and set up a shelter by the side of the road.  A reckless truck driver smashed it, but the locals built a replacement.

“It doesn’t trust anyone else and will not even let anybody else stroke it,” Selina said.

Hopefully now that news of this dog is spreading, someone can set up a very large live trap and bring him inside where he can learn to love and be loved again.