He was on death’s doorstep last January, one week away from being euthanized due to having been labeled an “aggressive dog” by the Missouri German Shepherd Rescue.  His name was Koda, and he was believed to be unfit to be in public.  Then Monroe City Search and Rescue stepped in and rescued the 3 year old, and nothing has been the same since.

On January 13th, Koda was picked up and brought to the home of Monroe City SAR  and within days was displaying his agility and intelligence.  He was so enthusiastic that his name was immediately changed to Diesel.  He has never looked back.  Lead K-9 Handler Rich Enochs used tennis balls as rewards and nothing could make Diesel happier.  He adjusted very quickly to life at SAR and got along well with the other dogs, so much so it was hard to believe that what they were initially told about Diesel’s behavior was true. 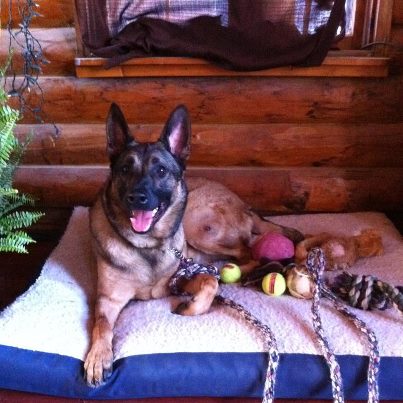 Monroe City K9 Search & Rescue is a Non-Profit 100% volunteer based organization dedicated to finding the missing, lost and injured.  SAR K9s are trained to find living victims that maybe trapped, injured or lost.  “Find” is the most important word they know.  SAR dogs are trained to follow a scent in different terrain and weather conditions and to identify the victim from other scents. Their skills are sharpened through regular training sessions and by handlers with daily training at home and in the field, and their training is ongoing and time intensive.

It’s as if Diesel was born to be a SAR dog.  He has become a True SAR K9, visits with the Mentally Handicapped, is “Best Buds” with the Lead Handler’s 2yr old grandson and has become family with the other SAR K9s and,  on October 9th Diesel passed his certification testing.   He is certainly enjoying his new role and being the benefactor of the love and attention he deserves, and Monroe City Search and Rescue made all this possible by believing in him.