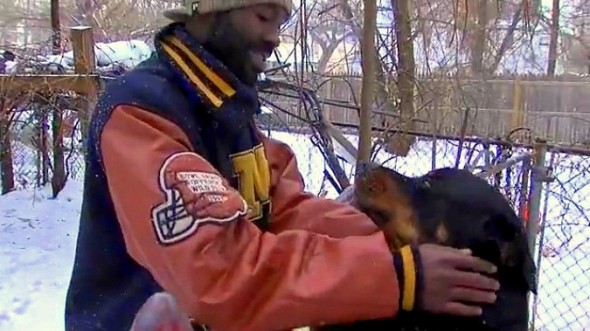 Every morning, Zeus looks forward to his first trip outside. But this morning, he absolutely refused to go out. Instead he barked and paced, but his family couldn’t understand why – until flames began shooting out of the walls. Because of Zeus, everyone made it out of the fire safely.

James Keys says his grandmother Mary lets their one-year-old Rottweiler out in the backyard every morning around 8:30, but today Zeus wouldn’t budge. He anxiously barked and paced near the back door, desperately trying to alert his family.

“He saved my life, because he kept going to the back door,” Mary said. “He came to warn me.”

James was awoken by Zeus’ commotion, and Mary did not go back to bed because the dog was so agitated.

Moments later, flames could be heard eating away the inside of a wall. Once he knew Mary and James were with him, Zeus and his family made it outside.

The home was equipped with smoke detectors, but Zeus was the first to sense that something was awry.

Larry Gray with the Cleveland Fire Department says that pets, dogs especially, are able to sense heat and atmospheric changes in their surroundings much sooner than humans do.

The Cleveland Fire Department will give out and install smoke detectors to residents for free. Their phone number is 216-361-5535.

The Keys lost all of their belongings, but made it out with their lives because of one very important family member.

“They say they’re humans’ best friend,” James said. “He earned the right to be called that today.”