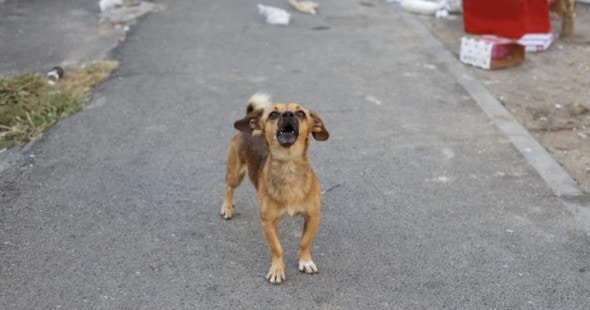 In western Massachusetts, police are calling a dog a “real-life Lassie.”  Almost out of nowhere, a random dog approached an officer, barking his little head off and making quite a commotion.  His friend was trapped and needing rescue, and if he hadn’t gone for help, the story might have been quite different.

The little dog lead the officer to a very icy, 30-foot deep embankment.  That’s when the officers discovered the dog’s canine friend stuck at the bottom, and tangled up in the undergrowth.

The officers called in the fire department.  They brought a large ladder truck to easily access the dog stuck below, and make sure he was rescued.  After pulling the dog out, they took him to a local vet for a medical evaluation.

Although the dog was very scared, and did have some scrapes and bumps from the fall and subsequent tumble in the underbrush, he was otherwise in good health.  The family that the dogs belong to were then contacted, and a happy family was once again made whole.

The family said that the dogs had run off together hours earlier.  Their human mother unfortunately had a medical emergency, and while emergency services were taking her out of the house and to the hospital, the dogs bolted.  Police officers that showed up to the home tried to corral the dogs, but ultimately failed, and the dogs got away.  No further information on the condition of their human mom had been issued at the time this article was written.

In a press release, the police department that helped rescue the dogs said, “Apparently, any dog in the right circumstances can turn into Lassie.”