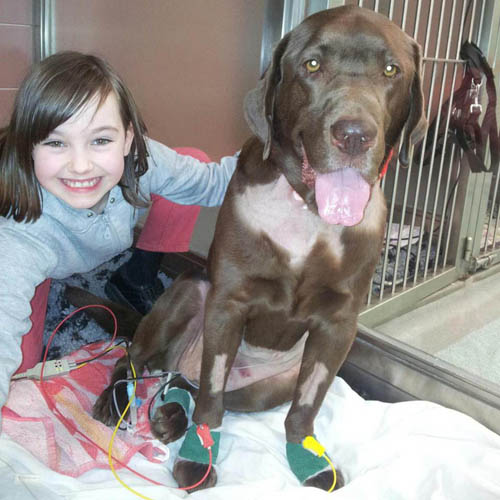 Charlie is a five-year-old Lab that eats just about everything he can. His appetite almost cost him his life when he jumped onto his owner’s kitchen counter and ate a packet of raisins. It nearly killed him, but veterinarians were able to save his life.

Charlie is known to eat sticks, his family’s socks and just about anything he can find. When he ate a packet of raisins from his family’s kitchen counter, his owner Louise Middleton rushed him to the vet. Raisins, along with grapes and currants can cause severe kidney failure in dogs. When she arrived at the vet with Charlie she was told to prepare for the worst.

The vet quickly started Charlie on dialysis. “Initially, Charlie’s kidneys were not producing any urine at all so he was treated with peritoneal dialysis, allowing for clearance of toxic products normally cleared by the kidneys,” said a spokeswoman for The Royal Dick Vet School. “After a few days of treatment, his kidneys began producing urine again. We are hopeful that his kidney function will continue to improve over time.”

The Middleton’s are thankful that Charlie was able to pull through, though his treatment ran up a large vet bill. “The bill for dialysis, surgery, scans, drugs and intensive care came to £8,000,” said Louise Middleton. Charlie will remain under observation for another week before he will be able to go home.

Even the Dr. Tracy Hill who treated Charlie admits he is lucky to be alive. “Without the dialysis he would have died,” she said. Charlie’s story is an important reminder of the danger that raisins, grapes and currants can be to our dogs. A spokeswoman for the Royal Dick Vet school reminded dog owners to check with their vets about foods that can be dangerous to your dogs, “There are many things that people can eat that are bad for dogs and cats.”