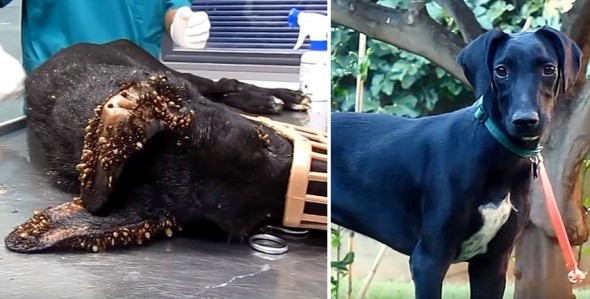 When Blossom was found wandering the streets of Athens by a volunteer with Orphan Pet Greece, she was absolutely loaded with ticks.  She also had a chain wound so tightly around her tail that there was no saving it.  She nearly died from blood loss, but today she is truly living, and has even been adopted.

When the volunteer found her, he could tell this girl had been suffering for a long time.  The wire or chain around her tail looked like it had been there since she was a puppy.  It had cut off the circulation so badly that it was completely dead, and had to be amputated.

Blossom was covered in thousands of ticks; her ears drooped under the weight of their blood-bloated bodies.  They had drained her of blood to the point that she only had days left to live.  She was given a transfusion, and her mom painstakingly removed all the ticks.

Once she was healthy, Blossom learned how to love and play with other dogs.  And best of all, she found a home.

Orphan Pet Greece can also be found on Twitter.