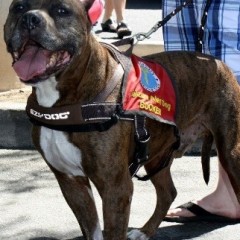 The American Humane Association’s Hero Dog Awards features an incredible group of nominated service, military, therapy, guide, law enforcement, and search-and-rescue dogs. One of those dogs is Booker, who three years ago was a shelter dog that had been confiscated in a drug bust. Now he is a big help to his new owner, as her seizure alert dog.

Dawn Myers was on craigslist looking for a bookcase three years ago when she stumbled across Booker who was living in an animal shelter. Booker had been confiscated in a drug bust and was in need of a new home quickly or he was going to be euthanized. Myers decided to provide that home for him.

About six months after Myers welcomed Booker into her home she began to suffer from seizures. With some training Booker learned how to alert Myers by licking and pawing at her to warn her that a seizure is coming on. He is now officially certified as her service dog.

Myers had never heard of the Hero Dog Awards until she received emails from someone who had nominated Booker.

“You can actually nominate you own dog,” said Myers. “Because someone had actually thought of him and emailed, it’s an honor.”

There are eight categories in the awards, and a finalist will be selected for each. From the eight finalists the winner of the Hero Dog Awards will be chosen. Booker is entered in the service dog category and is currently in third place in his category. Online voting will continue through July 30th.

To vote for Booker and see the other amazing nominees visit the Hero Dog Awards website.

“It’s a cool thing,” said Myers. “But it isn’t about winning for us. Just being nominated is an honor enough.”