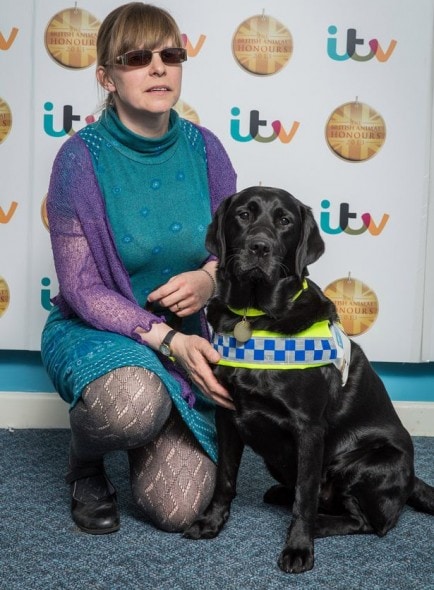 For Tony Brown-Griffin her life is made possible because of her assistance dog Hetty. Tony not only suffers from life-threatening seizures but is also blind. Hetty is the first dog dually trained as both a seizure detection dog and a guide dog.

Tony was diagnosed with epilepsy in 1995. She would have 12 major attacks and as many as 40 minor attacks a week. They not only exhausted her but put her in life-threatening situations. “Once I put my head through a glass shower screen,” said Tony. “Incredibly I wasn’t injured.” She has broken ribs, fractured her wrist and has had multiple bruises from her seizures. One time she had a bad episode of back-to-back seizure that led her to spend most of her summer in intensive care. “I felt as though my life had stopped at 24,” said Tony.

At the time Tony and her husband Dan had a border collie named Rupert who would naturally sometimes alert Tony to her seizures moments before. The alerts weren’t regular enough though, but it inspired Tony and her husband to see if Rupert could be trained. Once Rupert was trained Tony’s life changed dramatically for the better.

Six years ago Tony became registered blind. When her seizure dog at that time, Ajay, retired she knew she needed a dog that could not only detect seizures but be her guide dog as well. Tony worked with two dogs and she instantly knew Hetty was the dog for her. “I had to walk both dogs up a path,” said Tony. “The first dog just took me straight up it, but Hetty was weaving me through the path. When I asked why, it’s because she was guiding me around all the twigs and leaves, whereas the other dog just took me through them. We just clicked.”

Now Hetty is always by Tony’s side and allows Tony to do the things she loves. “I go horse riding again thanks to her, and I take the girls swimming, too,” said Tony. “If Hetty starts wailing I’ll go over to be checked and then if I’m Ok, I can carry on.” A great relief to Tony is that with Hetty’s help her daughters don’t have to witness her having a seizure. “I’ve seen what it’s like for an adult to have a seizure and it’s not nice, so for them it would be terrifying.”

Hetty continues to impress Tony and everyone she meets. Her impressive skills are being honored by the British Animal Honours 2013. “Hetty’s my best friend and savior in the form of a black ball of fluff,” says Tony. “It’s lovely she’s being recognized, she’s a superdog.”