An Alabama couple is filing an unusual insurance claim after a dog destroyed their minivan. Adam and Emily Morck say they were puzzled to find their Dodge minivan torn apart in the driveway of their Foley, Alabama home. The couple were packing for a fishing trip when they noticed that something was amiss. 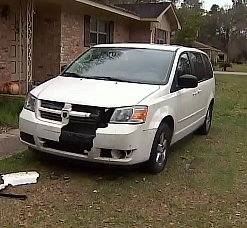 “I saw the Dodge symbol [lying on the ground] and then turned and looked and saw the carnage,” said Adam.

The Morcks called 911 while pondering the possibilities.  “We thought maybe a disgruntled former employee of mine might’ve done something crazy,” Adam said. Believing that a vandal was responsible for the damage, the couple said they were surprised when investigators shared their findings.

“[The investigator] looked up like a deer caught in the headlights and said, ‘Guys, I think a dog did this,'” Adam said.

They say the shredded bumper, the blood, the dents, the bites and the claw were the work of one very determined dog. When a cat hid under the hood of the minvan, the dog tore the vehicle apart to try to get to it.

The Morcks say they will cross their fingers and file a claim – they just hope the adjuster believes them when they explain. “Here’s the unexpected. Natural causes for sure,” said Adam.

Foley Police say they are keeping an eye out for strays, but at this time, no witnesses to the incident have come forward.