A Tuscon woman says she was shocked when she happened upon a Craiglist ad that simply read, “Found: pit bull with recent leg cut off.” 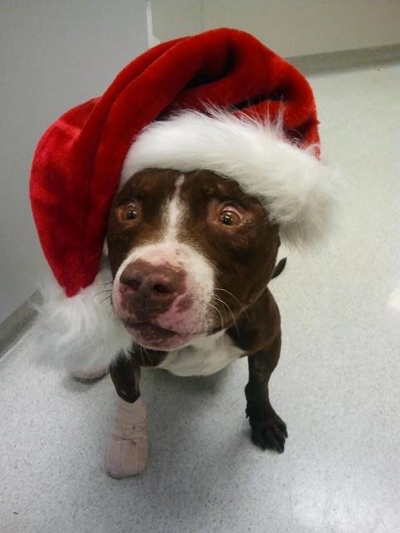 Troubled by what she read, Mary (last name undisclosed) responded to the ad, met the people who had found the dog, and was horrified when she saw the condition he was in. She rushed the pit bull to Acacia Animal Hospital for emergency surgery, hoping that it was not too late to save the suffering animal.

That decision probably saved Boo-boo, aka “Chocolate Boy’. Scarred by countless dog fighting injuries, he was missing part of his leg, severely underweight, had multiple fractures, and had 6 or 7 gun pellets lodged in his flesh. Clearly tormented, the weakened dog was running out of time.

Now, thanks to Mary, time is on his side as Chocolate Boy begins the healing process. Ten days ago, Dr. Marc Laudonio says he was half his ideal weight. He also said it was painfully obvious that the dog’s missing foot was not surgically removed. Laudonio, owner of Acacia Animal Hospital, said, “There is a belief that leg had been mauled so severely that it was just flopping around, that someone cut it off.”

Chocolate Boy’s wounds have been cleaned and tended to, and he’s already gained 4 pounds. Acacia Animal hospital employee Brendan De Smet says the dog has suffered physically and emotionally, but is quick to point out that his spirit remains intact. “Now it’s our job to make sure good medicine is practiced, then we’ll have good people offering foster care, and then have a great person giving him a forever home.”