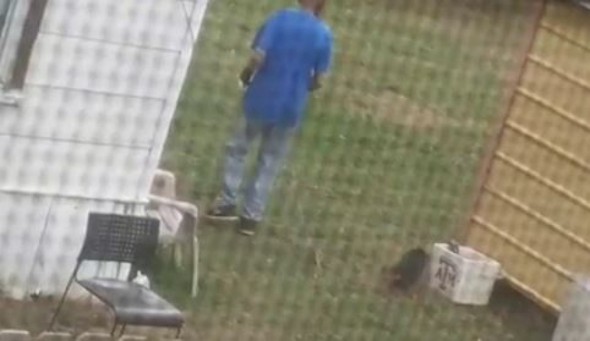 A video posting on social media, after multiple attempts for police intervention, showing the alleged animal cruelty finally results in the surrender of dog.

For almost a year, Layten Durda had been reporting various incidents to College Station police with few results, but after the video posting received more than 50,000 views, things changed. 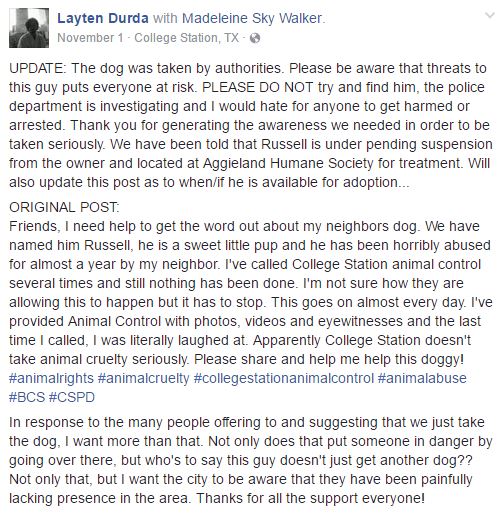 According to WTAW Newtalk 1620, the owner surrendered the dog“to appropriate authorities for on-going evaluation and care.”  A released statement said, “the investigation into these allegations continues and there will be no further information released until this process is completed.”

On Tuesday November 1, 2016 at approximately 1543 hrs the College Station Police Department received a report of possible Animal Cruelty within the city.

Animal Control Officers were dispatched to begin their investigation into the matter.

As part of the continuing investigation Animal Control Officers met with involved persons and the animal in question has been surrendered to appropriate authorities for on-going evaluation and care.

The investigation into these allegations continues and there will be no further information released until this process is completed.

After our Animal Control Officers began their follow up investigation this incident became the focus of intense concern through social media posts.

Some of these posts urged citizens to take action on their own to protect the animal.

The College Station Police Department is currently following up on this incident through appropriate venues and requests citizens to respect this process as it is underway and not do anything to interfere with our efforts.

Thankfully, Durda was persistent and his efforts have resulted in the dog being removed from the horrible situation.