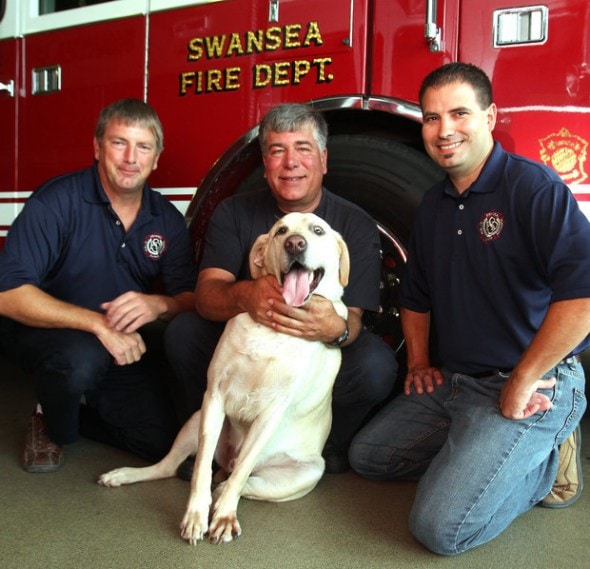 In June, firefighters from Swansea, Illinois saved the life of a yellow Lab named Auggie. Now Auggie is recovered and living with one of the firefighters who saved his life.

In June firefighters rescued Auggie after they found him locked in a bathroom of a burning home. He was unresponsive at the time and firefighters weren’t sure if Auggie would survive.

“When we brought him out of the fire and were giving him oxygen and trying to get him to breathe, well, I just felt sorry for him,” said Fire Chief John McGuire.

Auggie spent most of the summer at Lashley Animal Hospital recovering from the fire. Fire Chief McGuire kept checking in with the hospital to see how Auggie was doing. When McGuire learned that Auggie’s owners had surrendered their ownership he didn’t hesitate to offer Auggie a home.

Auggie has been home with McGuire for about a month now and is settling in well to his new home. Auggie is constantly by McGuire’s side.

Auggie’s lungs are still recovering from the fire, but his veterinarian says that his lungs should continue to improve.

“Once in a while he’ll have some spasms – coughing and hacking,” said McGuire. “Sometimes it’s like having a dog with COPD, but the more I get him out and the more he runs, the better it gets.”