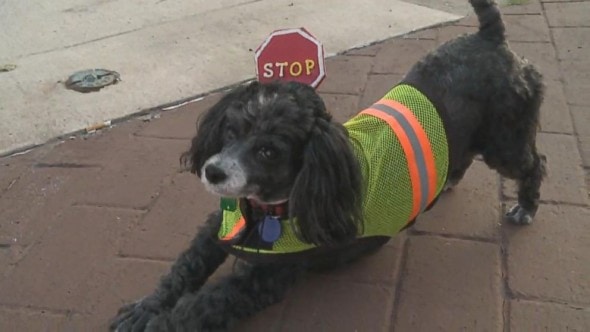 Patches used to work as a crossing guard dog with his human.  However, he was deemed a possible liability by New Jersey, so he had to leave the job he loved so much.

All is not lost however.  Patches now has a new job, working as a good will ambassador and security dog at Country Beary Shack at the Jersey Shore.

Patches will be given a special uniform, and will be out from to greet customers from 2pm to 4pm.  Patches seems to be very happy about his new position, and so is his human.

Patches is very much missed by the families he used to serve as a crossing guard.  The decision that there were too many possibilities for things to go wrong, that the school system could be held responsible for.  So they told Patches and his human that the dog could not be present when the human was on duty.

“Patches is missing,” said Jersey Shore resident Amy Wampler. “We didn’t see him this morning and we wondered why, and now he’s not here.”

Lyra Clark could often see Patches at work from the front of her shop.  She owns Country Beary Shack, and came up with the idea of bringing Patches in to work for them. 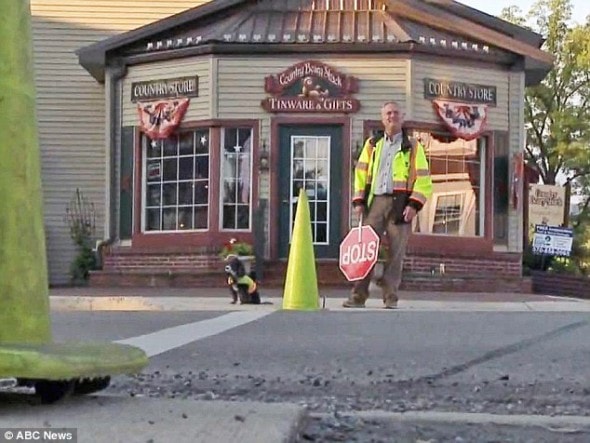 “People come by, even take pictures of him.  He’s been on the news.  Everybody likes him.  He’s a really nice dog,” said Clark.

In a statement released by the school’s superintendent’s office said:

“We have clear policies in the school district regarding any type of animal during the work day. Yes, he is a cute, adorable pet. The bottom line: there are always unanticipated risks with an animal. Any known distraction needs to be removed.”

So, Patches may no longer be a crossing guard dog, but he still has “gainful” employment, and all his local friends can still see him.