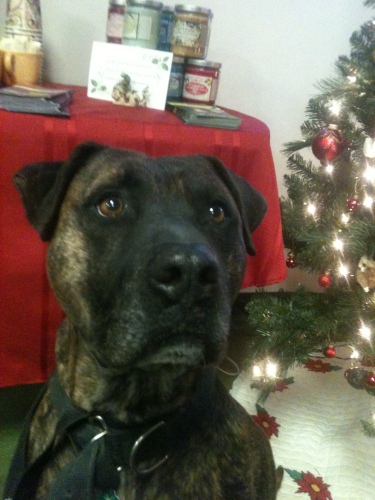 Happy news has come to shelter dog Chopper – he’s been adopted.  A family with six kids came to the Paws ‘n’ Claws Animal Shelter in Attica, Indiana, to pick out a family dog.  They had no idea they would be taking home one who had recently been a victim of a break-in and forced fight.

Last month, the Paws ‘n’ Claws Animal Shelter was broken into, where two cats were killed and three dogs injured.  The perpetrator(s) put two of the shelter’s largest dogs into a pen, and then tossed in a cat, who was mauled to death.  They also put a kitten into a pen with a mother dog and her litter of eleven.  Sadly, the kitten was also killed.  Shelter staff arrived the next morning to discover the dogs covered in gashes and blood.

Shelter co-founder Melynda Bryant said the dogs have never been aggressive.  She was deeply disturbed, and became emotional over the traumatic event.

“It’s because Chopper, we have had him over a year.  He is just a big baby,” she said.

Police are still investigating, and have several persons of interest to question and polygraph test.  It seems apparent that fighting was the sole motivation for the break-in, as nothing else was moved or stolen.

The community was reeling over this notion.  “A life is a life.  It doesn’t matter if it’s an animal or a human,” said Amy Morlan, Attica resident and pet owner.

There has been such a huge outpouring of community support that with the help of the Humane Society, over $4000 has been raised for information leading to the capture and conviction of the perpetrator(s).  Many have donated dog food and money for medical expenses, and one person even donated a much-needed security system to the shelter.

A month later, Chopper and his forced foe, Flynn, are healing up nicely, as is mother dog Winnie, who was also injured.  They have not seemed to show much post-traumatic stress.

Chopper may be leaving Paws ‘n’ Claws in stitches, but he’ll be healing in the comfort of a new, loving family.

“We just feel like we’re giving him something and he’s going to give us something too,” said adoptive mom Jill.  “We really wanted to adopt a dog and do something for the community.”

Flynn is still looking for a family, but due to the stressful nature of the incident, it is recommended that he go to a one-pet home.