In Burrillville, Rhode Island a dog was found out on the streets by a good Samaritan, and she was nearly frozen solid.  Thanks to Toni Liberatore, this elderly dog lives to see another day, and is in a much warmer and safer place for the moment.

Elsa, as she’s now called, was clinging to life by a thread when she was found and brought to animal control.  Liberatore couldn’t believe the dog was actually still alive.

“She was like holding an ice cube to my body. She was frozen. She was pretty much in and out,” Liberatore said. “She couldn’t hold her own head up.  She was extremely emaciated, I could feel every bone in her body.”

Liberatore would never have even seen the dog if she hadn’t been out walking her own.

“I came outside to walk my own dog yesterday morning. And there was a truck parked down the road and she kept trying to crawl underneath it. So as my friend was leaving for work I told him to bang on the hood of his truck because there might be a cat under there,” Liberatore said.

When Liberatore called animal control to check on Elsa, she was told it took many hours of heating pads and tons of fluids to even get Elsa to register a temperature on a thermometer.  There wasn’t a whole lot of hope for her at this point.

After getting some much needed emergency medical attention, her condition is improving, but she’s far from out of the woods as of yet.  She’s believed to be either 13 or 14 years old, and along with being nearly frozen solid, she has a host of other medical issues as well.

“It wasn’t just the dog being out for a night. That was a long time of abuse,” said Liberatore.

Elsa has been transported to the Northern Rhode Island Animal Hospital where she is in stable condition.  Anyone with information on this dog is asked to contact Burrillville Animal Control @ 401-568-9480. 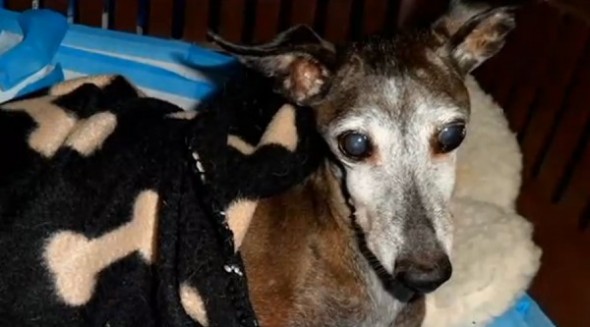