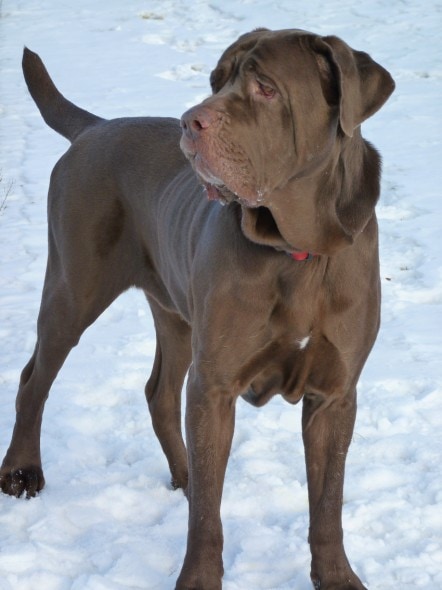 A year and a half after Endo, a 115 pound mastiff, went missing from his Florida family’s home he has been found over 1500 miles away in Wisconsin.

In May of 2011 Endo broke through the fence surrounding the Hartzog family’s Cape Coral, Florida yard and disappeared along with the family’s other dog, a lab. Neighbors saw the Lab get attacked by an alligator and the Hartzog feared the Endo had suffered the same fate. “We were so heartbroken when he was gone,” said Denise Hartzog. “I never imagined that he’d turn up.”

On January 2nd of this year Endo was found by someone in Superior, Wisconsin. They brought Endo to the Animal Allies Humane Society shelter. Endo was in good condition but was missing his tags. A scan for a microchip brought up the Hartzog family’s information. Endo will make his way back to Cape Coral this week.

Animal Allies has been able to piece together a rough story of how Endo ended up so far away from his Florida home. Endo was found by someone in Florida who tried to find his owners but was unsuccessful. That person brought Endo with them to Minneapolis. Endo stayed with them until they had a change in circumstances and needed to give Endo to a friend in Duluth. In turn that person ended up needing to give Endo up and found him a new home in Superior. Endo escaped from his new home which led him to the Animal Allies’ shelter.

Endo will get a send-off celebration from Animal Allies on Wednesday morning before getting a ride with some Good Samaritans. The Hartzogs are excited to have Endo return home. The fence around their yard has already been reinforced to prevent Endo from breaking through again.