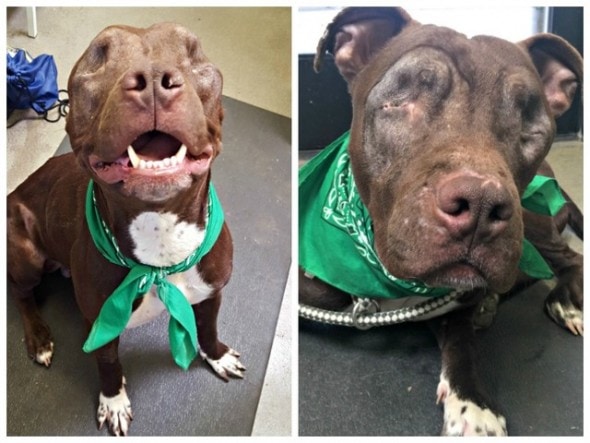 To say that Ashton was in a bad way when was he was found and rescued is an understatement.  He was brought into an animal shelter with both of his eyes basically popped out of their sockets, and showing many other forms of abuse and neglect.  Today, Ashton has a forever family according to the Arizona Humane Society.

The two-year-old dog was found wandering the streets with both of his eyes so badly damaged, they were propping out of his head.  He had been picked up by someone and brought to emergency animal medical technicians with the Arizona Humane Society and rushed into surgery.

They were able to save Ashton, but not his eyes, leaving him blind.  One of the eyes, according to surgeons, had been damaged in that way for quite some time, and the other was injured more recently.  In any event, both had to be removed, which would make finding a forever home a bit more difficult.

Medical staff has been helping Ashton adapt to life as a blind dog, and his new forever family will have to have saint-like patience with him as he adjusts, but his new family is confident that they can provide for him a great place to live, as well as all of the love and understanding that he’ll need to have a happy life.

Even though things in life did not start off well at all for Ashton, he is described as full of pep and life, and a very, very sweet dog.  His new family promises to do whatever they have to make Ashton’s life a really great one from here on out.