Don’t judge a book by its cover is an old and apt adage, for rescue dogs in particular. Gorgeous, sweet, 70-pound Lupine had been at the Arizona Animal Welfare League & SPCA shelter since August.

Michael Morefield, spokesperson for the shelter, told the Dodo her previous owners explained they were giving her up “because she was ‘too big.'”

Of course, shelter staffers and volunteers couldn’t possibly disagree more, but sadly, due to misconceptions about big dogs with blocky heads (not to mention rental properties that restrict pet weights and entire cities that restrict breeds and “breed types” based solely on looks, dogs like Lupine are very often overlooked, despite how charming and goofy they often are.

Speaking of which, here she is, snuggling herself into her blankets at the shelter. How cute!

Until recently, Lupine seemed to be doing well — always cheerful, silly and outgoing.

But, she still wasn’t adopted. And as the weeks went on, Lupine seemed to be growing “more somber,” as Morefield puts it. “That was concerning to us.”

To try and cheer her up, Lupine has been hanging out in staffers’ offices for a change of scenery an gone on all kinds of field trips in service to the shelter. Here she is helping unload the truck with members of the Veterans of Activy Duty Military of Dusty Dawgs Motorcycle Group, who generously donated a bunch of supplies: 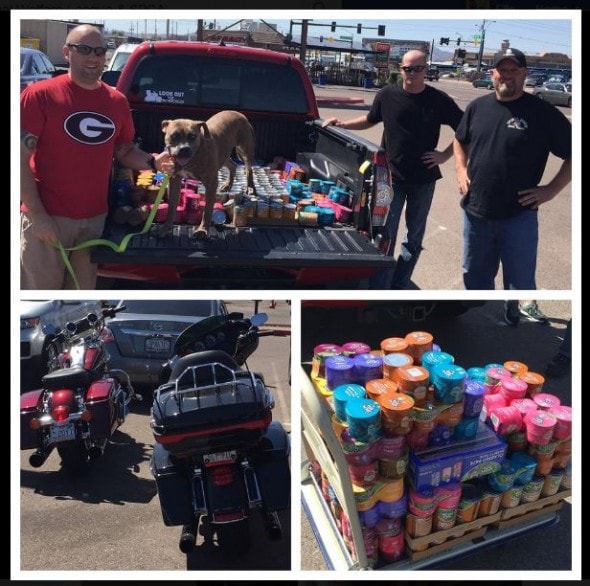 Over time, Lupine’s stellar behavior during all these events, with all kinds of people and animals, gave the folks at the shelter a great idea.

Lupine would make the perfect “ambassador” for large dogs just like herself, showing everyone what model citizens big dogs can be. She is presently being officially evaluated for the job. Once cleared, Lupine will begin a new “career” going out to schools and community events to show everyone that big shelter dogs with ginormous square heads are super-great, super-sweet, super pets!

They hope she will be the voice that helps “the next Lupine” spend far less time in the shelter and find his or her forever home quickly.

What’s more, the new job comes with its own forever home. Lupine will live with the shelter’s education director.

“She will have constant enrichment, dog friends and a support network of people to help her be successful,” says Morefield.

34 thoughts on “Dog Given Up For Being “Too Big” Gets New Life, New Job”