A Michigan dog is recovering after being tied up and abandoned behind a Walmart.  She was freezing cold and was forced to chew her paw off after it became hopelessly tangled in her tether.  Thankfully she was saved and is now looking for a home.

Police are searching for the two black men shown on a surveillance video getting out of a Chrysler 200 and tying up a dog behind a Walmart in Roseville, Michigan.  The pit bull-beagle mix looked around for help, desperate to get out of the cold.

It appears that before she was abandoned, she was an outdoor dog left tethered with a cable.  Her foot became so badly ensnared in the cable that she was forced to make the painful decision of chewing off her paw.

Walmart employees discovered her, and Melanie Wittner, the founder of Hopeful Heart Rescue, was called in to take the dog in. 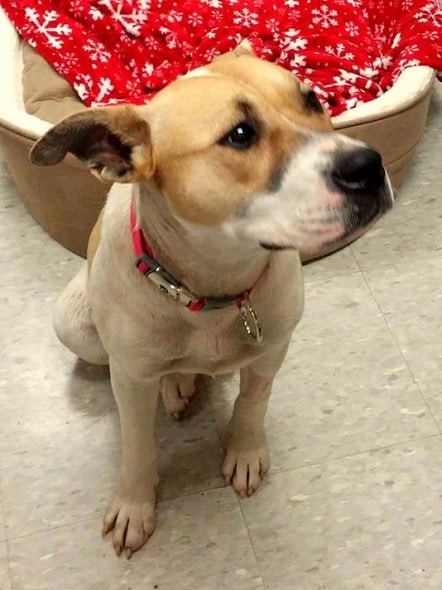 “It was really cold out. She was stuck in one position,” Wittner said.  “Imagine your cold feet are stuck to the ground and imagine something stuck around it.”

The dog was taken to animal control and then released to Wittner.  She was named Courtney, and taken to the Advanced Animal Emergency.  Nonprofit group 4 Paws 1 Heart paid to have her leg properly amputated and have the bone shards removed from her stomach.

Even though she went through something horrible, Courtney is very happy and recovering well.

“She goes for car rides. She just absolutely loves people,” Wittner said.  “Her favorite thing is giving kisses to everybody. She’s not angry… She’s just the happiest dog in the world.”

Some donations and offers for a home have already come in. 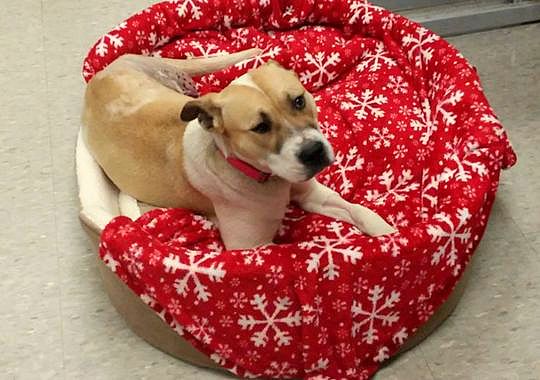 “We just want her to go to the best home possible. We just want to make sure she has the best life that she deserves after everything she’s been through.”

As for Courtney’s negligent former owner, Wittner hopes they do the right thing.

“I hope that those people turn themselves in because they’re cowards. That’s the lowest a human can be … they don’t deserve to have another animal in their home.”