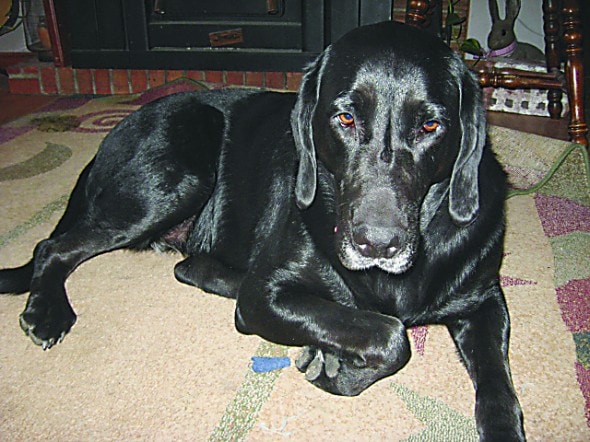 Lucy went missing back in October after she managed to roll down the car window and jump out of the car while her family was sitting at a red light. Now three months later the Braulick family and Lucy will finally be reunited.

In October Tim and Amy Braulick of Great Falls, Montana were picking their daughter up from a treatment center in Kalispell, Montana when they believe Lucy, a black lab, managed to roll down the automatic car window. Lucy then proceeded to jump out of the vehicle without the Braulick’s realizing as they sat at a red light. When they picked their daughter up they realized Lucy was gone.

The Braulick’s spent hours searching for Lucy that day with no luck. “It was heart wrenching. It still brings tears to my eyes, and my heart just hurts thinking where she could be,” said Amy Braulick. “We were thinking, ‘is she looking for us?’”

Over the next couple months the Braulick’s received several phone calls of people claiming to have seen Lucy, each time it ended up being a different dog or the lead went dead. When winter set in the phone calls became less and less and the Braulick’s hope started to fade.

“It felt like losing a kid,” said Tim Braulick. “I couldn’t imagine parents out there who have actually lost a child, because how you get attached to your dog – that’s the way I felt.” This week the Braulick’s decided to make one last effort to try to bring Lucy home. They placed an article in the local Kalispell paper, and only a few days later they got the news they’d been waiting months for.

A staff member at Flathead Community Animal Shelter read the article and recognized Lucy. She had been one of the dogs animal control had picked up just the previous week. At first the Braulick’s didn’t want to get their hopes up. “I was skeptical,” said Amy Braulick. “We had had so many people say, ‘We have your dog.’” Then the shelter worker sent pictures of Lucy to the Braulick’s. “Once I opened up those pictures, I took one look and saw her eyes and her ears – and I said ‘that’s our Lucy’,” recalls Amy.

On Friday afternoon Lucy was picked up by relatives of the Braulick’s. Today the Braulick’s are planning to meet up with them and bring Lucy home to Great Falls.