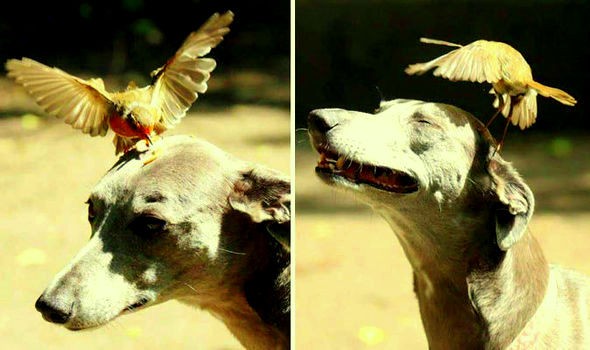 Animal lover Shaun Askey was used to having birds eat out of his hand, but had no idea that his dog Inca would be such an accommodating dinner hostess!

The UK man was at a local bird-watching spot, feeding the birds as usual when something slightly unexpected happened.

“I sometimes put meal worms on my shoulder and the birds come and eat them. I’ve even had some on my head.

“I wouldn’t say I’ve trained the birds, but I’ve got one that will actually come and sit on my hand for up to 30 seconds. But I’ve never heard of a wild bird sitting on a dog before.”

A friend was with him and was able to get a few snaps of the scene.

“Inca is very laid back. She’s rather big for a whippet but she’s so calm and nonchalant it’s unbelievable,” Askey said.

“She will just stand there and let the birds do it, and one robin is happy just to go on the floor underneath her legs.

“Parents and their kids love to watch me feed the robins, sometimes I have quite an audience.

“I don’t go every day, but most days. In the winter months the robins are obviously glad for a feed.  There were about nine altogether this winter, and there are about four there now.

“Bird watching, nesting and wildlife in general is something I’ve been interested in since I was a young lad.”