Coulter is a dog that works for the Washington Department of Fish and Wildlife.  He’s a specially trained Karelian bear dog that works alongside Officer Bruce Richards.  When a bear was seen wandering the streets of downtown Sumner, Coulter and Richards were called into action, and have relocated the bear making both the streets, and the bear a little safer.

Calls were coming in to police saying there was a bear loose and roaming about downtown Sumner.  The police called in Richards and Coulter to help them relocate the bear, and when they arrived on scene the bear was hiding in a vacant lot under the cover of some blackberry bushes.

Coulter had no reservations upon arrival, and immediately charged the blackberry bushes.  This backed the bear up enough so that Game and Wildlife officers could hit the bear with a tranquilizer dart, knocking it out.  The bear was loaded into a cage, and brought back to it more natural habitat.

Once back in the deep woods, Coulter knew his wasn’t quite finished.  The cage was opened, and out ran the bear with Coulter chasing and barking behind it.  Maybe Coulter just wanted to remind the bear of some of the unpleasantries of city life, and hopefully keep the bear away from people that could harm it, or it could do some serious damage to itself.

In past times, the bear would simply have been shot and killed by police.  A rather gruesome and unnecessary kill in many people’s eyes.  Thanks to Coulter the bear lives another day, and the people of Sumner can be a little less worried about becoming a snack for a hungry bear. 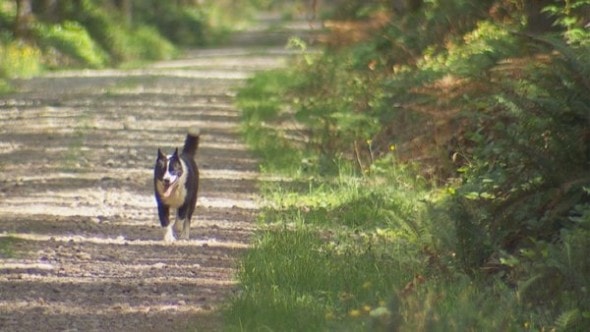