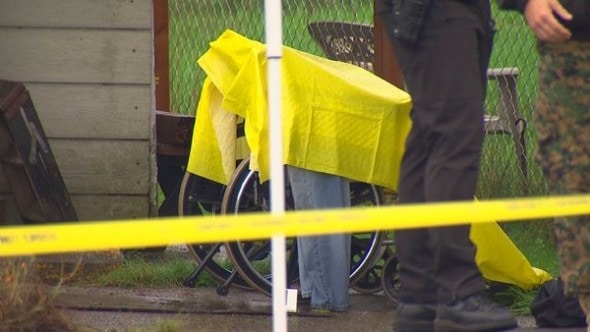 When a 67-year-old man in a wheelchair was stabbed at his Lacey, Washington home and left to die, his dog came to the rescue. Bella, a pit bull, ran to find help and not only helped save her the man’s life, but helped police catch the man responsible.

Terri Lynne spotted Bella in distress and stopped her car. The dog then led Lynne back to her home where the man was lying in a pool of blood next to his wheelchair with a screw driver stabbed into the side of his neck. Lynne called 911 for help and the man was quickly transported to the hospital.

“I wholeheartedly believe that that dog came out for help,” said Lynne.

Another neighbor who saw the dog later on agreed.

“You could see how sad, how terribly sad the dog was,” said Gay Nell Bare. “The dog knew.”

While police were at the man’s home investigating the crime they receive another phone call reporting another stabbing victim. A man had come home to find his wife dead in the garage. He told police that he believed his stepson was responsible for the stabbing. When he told police his stepson drove a brown Ford F-150 police were able to connect that with a car that had been seen in the first stabbing victim’s driveway earlier that day.

Police quickly arrested Tyler Lewis who confessed to both the stabbing of the man, who was a former neighbor or his, and his mother. Police say the quick discovery of the stabbing victim not only could possibly help save the man’s life, but helped get the suspect off the streets faster and prevented him from causing any more harm.

The man is currently still listed in critical condition with severe spinal cord injuries. It is not clear yet whether he will survive. Bella is now in the custody of the man’s daughter.