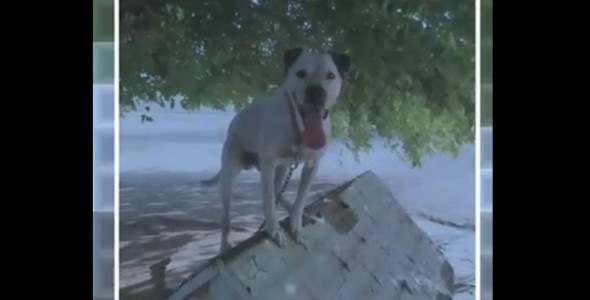 After being criticized through comments on the popular social media website Facebook, JoJo the dog is missing.  No one is 100% sure what has happened to the dog, but the people responsible for JoJo are claiming the dog was stolen, but neighbors are not convinced that was the case.

According to Mary Arniaz, “We came this morning and JoJo was gone.  And he was stolen.”  Arniaz helped care for the JoJo at her boyfriend’s property in Acampo, California.

Neighbors are not at all convinced that the dog was stolen.  They report that JoJo was kept tied to a tree with a 120-foot tether.  There is also a dog house that is on the eastern edge of the lot, and the human dwelling on the property has been vacant for the past two years.

“We feed him every day.  He has food and water.  He has a beautiful shade tree that he lives under.  He has his dog house,” said Arniaz.

Art Oelsner is a resident that lives near the property in question.  He lives about a quarter mile from where the dog usually is kept, and he’s got a completely different take on the dogs care, or in this case, lack thereof.

“He’s never left the chain in four years.  He’s on a tether 24-7, 365, with no human contact because nobody lives there,” Oelsner said.

Oelsner also said that for the past year and a half he was the one feeding JoJo on his morning walks.  He said that the dog was very malnourished and emaciated.

“And that’s why he looks good,” said Oelsner.  “Because he’s fed every morning and every night better than you or I eat.”

Oelsner had been posting comments about JoJo and his living situation on Facebook.  He’s been doing so on his personal page, and a page dedicated to his re-election to the Galt Joint Union High School District board of trustees.

“We’ve been following the posts and there was somebody that posted saying last night that they had the bolt cutters, the food, the leash, the truck and they were gonna come get JoJo,” said Arniaz.

This past Monday morning, JoJo was gone from the property.

“As far as I’m concerned, it’s all Art Oelsner’s fault.  He’s made up all of these stories and lies and people believed it and now they’ve stolen the dog,” said Eugene Marsili.  “We want our dog back.”

When asked about the missing dog, Oelsner is clearly not sorry about his efforts to feed JoJo and have him removed from the tether.  However, he made sure to emphasize that he is deeply affected by JoJo’s disappearance.

Arniaz and Marsili are hoping someone will come forward with information on JoJo’s location, and can help get him back home.