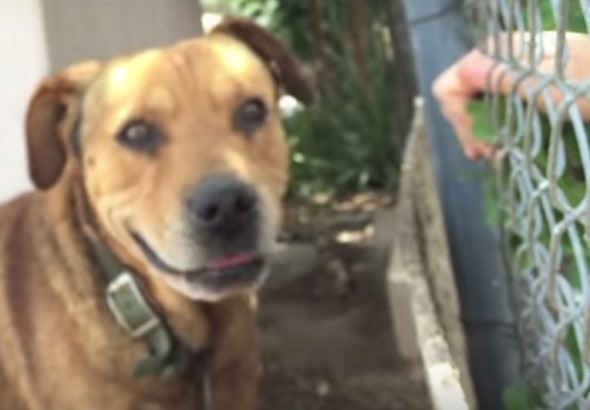 Jared Piper had walked past the dog in his neighbor’s backyard every day for about three years.  The dog never interacting with anyone walking past.  Even the dog’s humans barely acknowledged he was even alive.

Jared would often look at or even call out to the dog, but that only response he’d get is a snarl or a bit of growling.  The dog seemed to be very unfriendly, and a bit resentful of people.

However, one day, Jared had a huge surprise.  He got really low to the ground, and was telling the dog that everything was going to be alright.  Using a soft touch was enough to bring the dog around, and a friendship for the ages was forged.

Unfortunately, the dog’s former humans had badly neglected the dog.  He was constantly tied up in the backyard, with no loving human interaction of any kind.  They had deemed him “aggressive” and difficult to deal with.  They’re solution to the problem was put the dog outside, and leave him there.

Jared has rescued the dog, and now he seems to be a very happy dog.  It was Jared’s kindness and gentle hand that won the dog over, and now he has a forever home more worthy than where he started.