An Orlando woman selfishly ran errands and left her dog in her car, and by the time police arrived, it was too late to save her.  But when Jose Thomas was arrested, she found herself sitting in the back of a hot police car.

This is what the Orlando Police Department had to say on their Facebook page:

A tragic reminder of what can happen when pets are left in hot cars. Lily the dog lost her life yesterday because of her human’s carelessness. It’s not clear how long Lily was placed alone inside a crate in a car while her owner, Jose Thomas, ran errands. Officer James Falbo was dispatched to the call for a dog in a car. Bystanders had already busted the pup out of the car, but Officer Falbo, rather than wait for Animal Control to arrive on scene, rushed Lily with lights and sirens to an emergency vet.

It looked like Lily might live, but the trauma to her body was too great, and she had to be put down yesterday. OPD Captain Sue Brown paid the bill for Lily’s care. 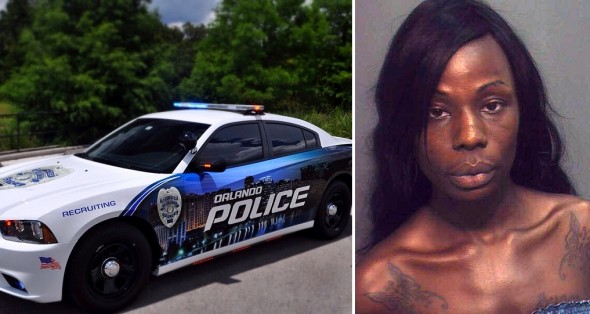 Jose Thomas was arrested for Cruelty to Animals, a misdemeanor. Officer Falbo believed that she did not mean to harm her dog, but nonetheless, little Lily died as a result of her actions.

This line from Officer Falbo’s report speaks volumes: “It should be noted, while Thomas was sitting in the back seat of my vehicle with the air condition on full blast and the rear windows fully opened, she stated it was really hot in the back seat. I then asked Thomas how she thinks her dog felt with the car not running and stuck inside a crate and at that time, Thomas did understand the extent of what she did.”

PLEASE remember that cars get unbearably hot very fast! Don’t leave your pets unattended in the hot Florida summer, even for a few moments.

Hopefully Thomas will have some time to think about her actions in jail.