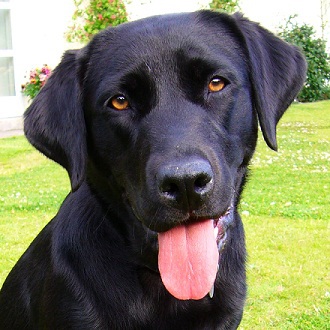 A disabled Maryland woman owes her life to her faithful black Labrador after he showed a firefighter just where to find her.

Retired Fire Lieutenant Billy Mills was driving past the home in Bowie when he saw smoke.  Suspecting that a structure was on fire, he pulled over and followed the smoke.  He arrived at the residence just as fire crews showed up to respond to a person trapped inside.

Mills began performing a “360 check” of the house, and found a black lab “frantically scurrying about the backyard,” according to Prince George’s County Fire Department Spokesperson Mark Brady.  When the dog saw Mills coming toward him, he went to the sliding glass doors and barked continuously, looking inside.

Mills peered inside and saw an immobile woman on her hands and knees.  He rushed inside and escorted the woman out into her backyard.  Mills and her neighbor Hugh Owens, a former volunteer fire chief, then brought to the front yard to receive medical attention for smoke inhalation and burn injuries.

Firefighters did their best to contain the flames, but the house has been determined to be unsafe and unlivable.  The cause of the fire is under investigation.

Though the woman’s injuries were not deemed to be life-threatening, had her loyal dog not alerted Mills, she may have succumbed to smoke inhalation in a moment’s time.