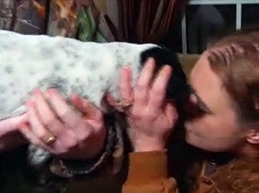 Police in Dickson, TN found a missing 6-year-old autistic boy after the child’s dog led them to him.

Caleb Walker wandered away from his home while playing outside and was missing for six hours until located late Saturday evening. Police said they found the child in a wooded area near the Walker’s home after the family’s dog, Milo showed them where the child was.

Sergeant Gill Wood from Montgomery County K-9 Search and Rescue said, “We were coming up the hill and we saw the little Jack Russell and we knew he was supposed to be with him. And I got out and started looking about 30 yards passed where the little Jack was. He was standing there shaking real bad. We are just glad we found the little guy, with the extreme temperatures tonight we were scared it would turn out tragically.”

Walker’s family was elated when Caleb was returned to them Saturday night. Walker’s grandmother said, “Thank you so much everybody, who had anything to do with anything. We just thank you so much.”