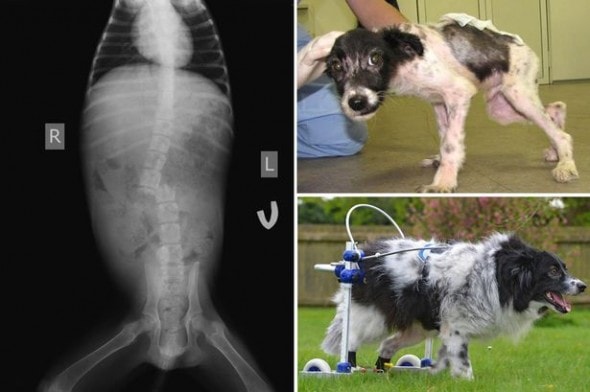 Spinal injuries are a very serious thing, especially if you happen to damage your spinal cord.  For most people with that type of injury can have permanent consequences, including loss of motor function.  Joshua here has suffered a spinal cord injury, but it looks like he’s going to be the exception to the rule.  Vets expect him to be able to walk again, and in the not too distant future, without the use of a mechanical aid.

Joshua’s past isn’t exactly clear, except for one thing.  He had been dumped on a roadside in Bulgaria, already having the severed spinal cord.  He had been left to die, but thankfully that didn’t happen.  Instead, he’d been rescued and taken out of there, and brought to the UK.

After arriving in the UK, he was brought to a shelter, and given a full medical breakdown.  That’s when the extent of the damage he’d suffered truly came to light.  Despite the odds, a team of vets and surgeons was actually successful in repairing the damage.  Which is something that up until now, no one believed was possible.

After the surgery, rehab was started as soon as possible.  After many hours of hardcore hydrotherapy, Joshua is now able to move his back legs again a bit on his own, but sensation seems to be returning to him as well.

Now, the task at hand is building muscle.  Before being able to go without any assistance at all, he’s using a specially built wheelchair to help speed the process of recovery.  It is estimated that he’ll make a full recovery, within one years time.