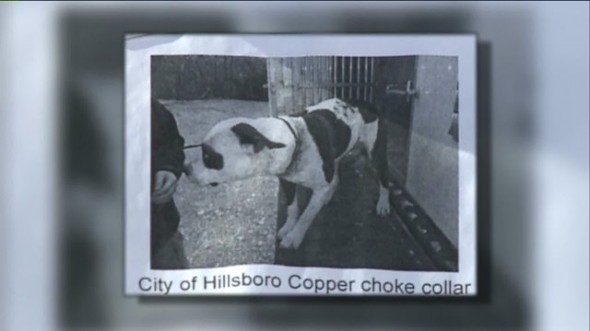 Sheriff’s deputies in Jefferson County are looking for a person whom apparently broke into the City of Hillsboro Dog Pound.  Those responsible had freed a pit bull sometime between midnight Monday and early Tuesday morning.

What makes matters stranger is the fact that the dog has been freed twice now.  Facility manager J.T. Taylor talked to news sources Tuesday afternoon.

“This is not the first time that we have had this particular dog stolen out of our facility,” manager J.T. Taylor said Tuesday. “We had it the first time in September of last year and someone broke in and stole it.”

On the third of February, after the dog’s human was arrested for undisclosed reasons, the pit bull was brought to the facility.  Law enforcement declined to give the name of the owner or reason for arrest at the time, so as not to compromise the case they have against him.  They did say that the owner was released from jail prior to the breaking and entering at the shelter.

Sheriff’s Department Captain Ron Arnhart was asked if it was to be assumed that the person or persons responsible was the dog’s owner.

”That’s what it appears at this point, but we’re hoping through the investigation, once it’s complete, we’ll get that question answered but several others that we have that we want to have answered as well,” said Arnhart.

Whomever is responsible sure made a mess of things while trying to free the dog.  At first, they broke in via a “dog run” only to find themselves locked in a cage with a different dog.  This dog was on quarantine after biting someone, just to be sure there was no rabies involved.  There’s a good possibility that the suspect was bitten in the process.

After several attempts to free the dog through more covert actions failed, the suspect gave up, kicked a different door in, and finally managed to use bolt cutters to free the intended dog.  Once the dog was finally loose, the suspect and the dog took off.

Whomever is responsible at the end of the day for all of this is facing a stack of charges.  If this is the owner, there was a much easier, and far less illegal way to get his dog back.  All he would have had to do was show up to the pound with the $50 release fee, and took his dog home.