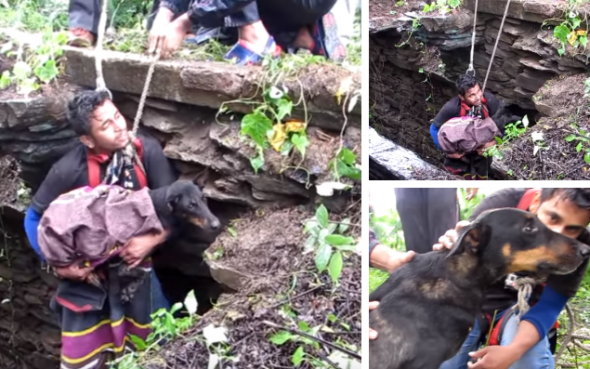 A dog in India is one lucky pooch.  She had found herself at the bottom of a local well, and couldn’t get out.  Animal Aid Unlimited was called in once the dog was discovered, and they went out to do a rescue.  When the dog saw them approaching her, she knew she was to be saved, and cried for joy, literally!

The relief is clearly visible on the dog as she sees the rescue workers coming to her aid.  A volunteer was lowered into the well, and brought her up to the surface safely.  Once out, she was so thankful that she was practically beside herself.

According to an Animal Aid Unlimited Facebook page post: “From the bottom of a 50 foot hole (a dry well) rose up the most plaintive cries for help.  When our rescue crew arrived she literally sobs she’s so beside herself with emotion, as if she needed to share behind tears the whole of her terrible ordeal, the fear she must have felt while falling, the disastrous realization that she couldn’t get out, and above her, she weeps almost in disbelief!  ‘Maybe…yes!  It is help!’ (or so she seemed to say).  Watch the strain on our rescuer Ganpat’s face in the final moments before Ruby is lifted from his shaking arms after he is rope lifted some 50 feet.”