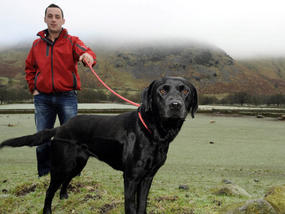 When Ruby went missing from her home for a few hours she was hit badly by a car. The black Labrador’s back was broken and her hip was dislocated. She dragged herself 500 yards back to her home where her owner rushed her to the vets. Ruby’s fighting spirit combined with the hard work of veterinarians has put her on the road to a full recovery.

Ruby went missing from her family’s farm in Northwest England for only a few hours. Long enough for her to be the victim of a hit and run that left her severely injured. When Tom Iredale rushed Ruby to the Paragon Veterinary Group the vets couldn’t believe she had been able to move at all, let alone drag herself 500 yards. “It was a case of mind over matter. Quite often you would have a paralyzed animal, but even before she was anesthetized Ruby was wagging her tail,” said Ann Noble with Paragon Veterinary Group.

“It didn’t look too good when we left her at the vet’s on the first night,” said Iredale. Ruby had a severe spinal fracture and a dislocated hip. Seven screws were needed to repair her broken back and two metal plates were used to repair her hip. “We see lots of dogs with fractures and spinal injuries, but in terms of spinal fractures it was a very severe injury without a shadow of a doubt,” said veterinarian Simon Roch.

Ruby has responded to her treatment better than anyone could have hoped and is back on her feet. “To see her now you wouldn’t think anything had happened,” said Iredale.