While a woman was walking her dog along a beach in La Cap Ferret, France, they happened upon what has got to be the single friendliest seal.  When the dog and seal began to snuggle, it had to be a real once in a lifetime moment for everyone there.

If one didn’t know any better, you’d almost think the seal has had regular contact with humans and their dogs to think it almost tame.  Remember dear readers, these are still wild animals.  They may display some almost “domesticated” behaviors, but you never know exactly what that animal will do if spooked or feels threatened by something.  It’s always best admire wildlife from a bit of a distance. It’s best for the safety of the wildlife, your pet’s safety, and of course yours as well.

It does seem though that this particular seal is quite well versed with how one is to deal with humans, and also seems to be a big fan of dogs as well.  This seal has even been known to try and hop up on surfboards with humans, presumably to hang ten……well, hang flipper with some cool surfer dudes.  If animals can set aside their differences and be loving and friendly towards one another, why can’t we do the same?

We humans could learn a great deal from animals. 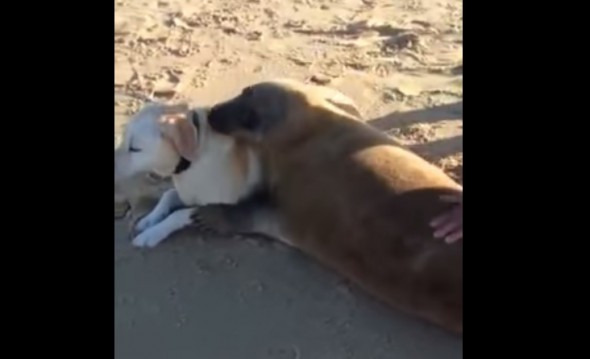