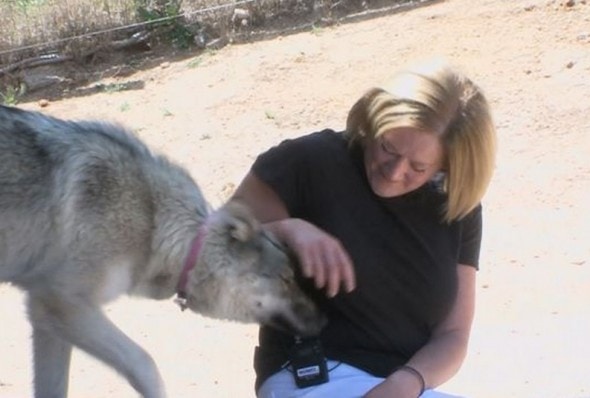 Six weeks ago, when Banjo had been lost after falling into the Poudre River while on a hike with Donna Hill’s son Braeden, no one in the family expected to see her again.  However, as luck would have it, Banjo was found last Friday in near by Estes Park.

Braeden had been holding on to Banjo’s leash when she slipped down the side of a steep canyon and into the river.  He did everything he could to hold on to her, but it was too much for him, and had to make the horrible decision to let go.

“She had that panicked look in her eyes when he let her go, and that was a hard decision for him because you know she’s going to float down those rapids,” said Donna Hill.

A search party had been assembled, but after weeks of searching, she was nowhere to be found.  The Hill family had to face facts, and come to terms that Banjo may be gone forever.

About six weeks into things, Donna got a phone call from Estes Park Police.  It was a phone call that she didn’t think was possible.

Banjo had been found!  She had been hanging around houses, apparently looking for food.  Locals noticed and animal control was called.  Miraculously, Banjo’s collar had held up through her ordeal.  The information on Banjo’s tags was used to find her family, and got them reunited.

“We were thrilled, just absolutely thrilled, to know someone had her at that point,” Hill said.

Banjo was definitely a bit banged up, sore and very hungry.  However, she seems very happy to be back with the humans she loves, and the family is very thankful they are whole once again.