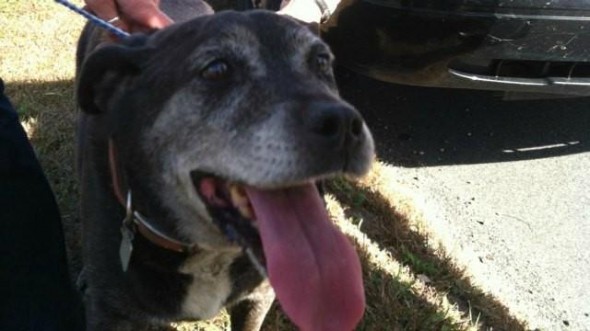 For twelve days Puff, a 14-year-old black Lab, was missing after she got loose on a walk and ran away. After nearly two weeks of searching Puff was found stuck in a storm drain. Rescue workers spent two hours saving Puff, who was miraculously doing well despite her ordeal.

Cynthia Edgar was walking her dog Puff when she got loose and ran away. Edgar desperately searched for her dog and put sings up all over the town of Woodbury, Connecticut but days continued to pass with no sign of Puff.

“I had just about lost all hope that I would find her again,” said Edgar.

Then on Thursday morning Holly Pinto was walking in a car dealership when she heard a whimpering. She stopped to figure out where the whimpering was coming from and found Puff stuck in the storm drain.

The Public Works  Department was called and they lifted the drain. Then the manager of West Chevrolet, Bill Gilbeault, went into the drain to get Puff. Gilbeault had a harness and was there to help Puff, but Puff was nervous and wouldn’t let Gilbeault near her.

“We had some food in there, trying to draw her out. Finally, she ended up poking her head out of the pipe,” said Gilbeault.

For two hours Gilbeault and others tried to coax Puff out of the pipe with no luck. Then Edgar finally arrived on the scene and that’s all it took.

“The dog heard her voice and came out of the pipe,” said Gilbeault.

Both Puff and Edgar were happy to be reunited.

Puff was checked out by a veterinarian, she has a small scratch on her back but is otherwise in good shape.