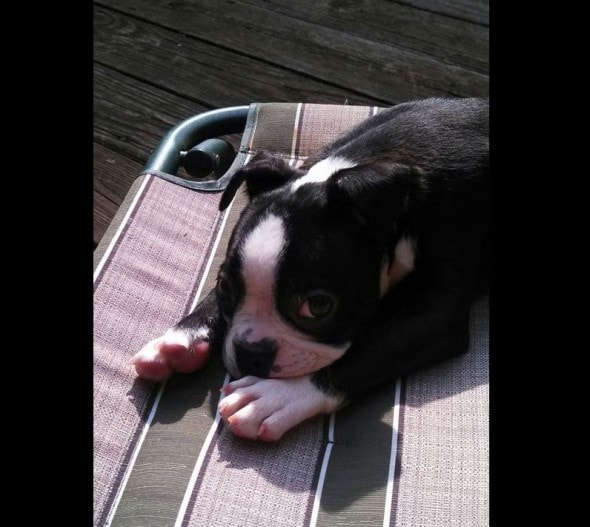 Rogue, the 14-month-old female Boston terrier that went missing after a car accident that occurred on Thanksgiving evening, has returned home.  She was found by her humans not far from the actual location of the vehicle accident, and it seems Rogue will be just fine.

“I can confirm the dog is fine,” Joseph Costa Morristown Director of Code Enforcement said. “A few cuts and scratches but no major problems.”

On Monday night, Karen Negrin, who works the night shift for Morristown Animal Control went to where the scene of the accident was, and started searching for Rogue.  There were sighting tips from that area coming in all night, so Negrin investigated.  Ultimately, Negrin came up with nothing.

“I think the owner went looking Tuesday morning in the area Karen was looking and ended up finding the dog,” said Costa. “I think it’s wonderful. We were all very much concerned for the animal.”

Brandon Dill was one of the drivers involved in the accident.  He was driving his Toyota Camry at an elevated rate of speed when he lost control of the vehicle and went off the road.  His car then struck the minivan that Rogue and family were traveling in.  The Toyota had been upended at this point and flipped over.  It landed on the front lawn of a home two doors down from the initial impact.

There was also a dog in the Camry that emergency responders were able to get to safety before anything had injured the dog too badly.  By the time all of the human victims were rescued, Rogue had split and was nowhere to be seen.  After many sightings, and one erroneous report of Rogue being struck by another moving car, Rogue was finally found, and brought back home safely.  As was said, Rogue had a few scrapes and bumps for her ordeal, but seems to be just fine.  Any damage done to her physically is expected to heal without further incident.