It was a casual tweet from a Tesla owner that got a response from none other than CEO Elon Musk himself. But it piqued the interest of animal lovers Internet-wide. 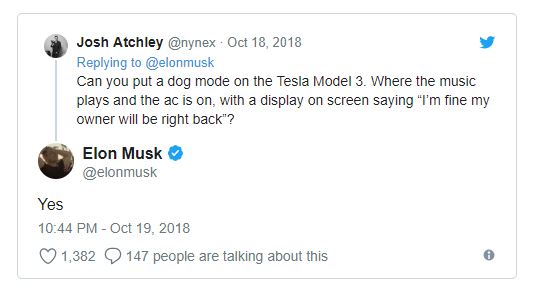 Drivers of these high-tech vehicles already enjoy a feature that prevents the interior from exceeding a certain temperature and according to TechRadar, Musk says that a future update may include a ‘Dog Mode’, which would display a message warning passers-by not to panic if they see a pet inside a parked vehicle.

After the above tweet started a conversation on social media, Musk confirmed that such a feature could indeed be implemented, with a sign on the rear window letting the public known the dog’s owner would be back very soon. He also agreed that such a mode could include a display of the current interior temperature so well-meaning strangers don’t break the car’s window to rescue your pup.

The pre-existing temperature-regulation feature, called Cabin Overheat, was pushed out to Tesla vehicles via a software update earlier this year. While in park, Cabin Overheat ensures that the temperature inside the car doesn’t exceed a preset limit. However, despite Musk’s positive response, this feature was created for safety, not convenience – so your animal will be safe if you leave it in the back seat for a few minutes. It is not for keeping them comfortable over long periods.

The American Society for the Prevention of Cruelty to Animals (ASPCA) advises never leaving a dog alone in a parked car, and notes that doing so is illegal in several states.

According to the National Weather Service, the inside of a vehicle can reach 109 degrees Fahrenheit in just 20 minutes when the temperature outside is 80 degrees Fahrenheit! And every summer, reports of dogs (and even children) injured or worse by people who leave them in hot cars for even a short period of time go up.

We think this “dog mode” idea isn’t half bad. How about you?