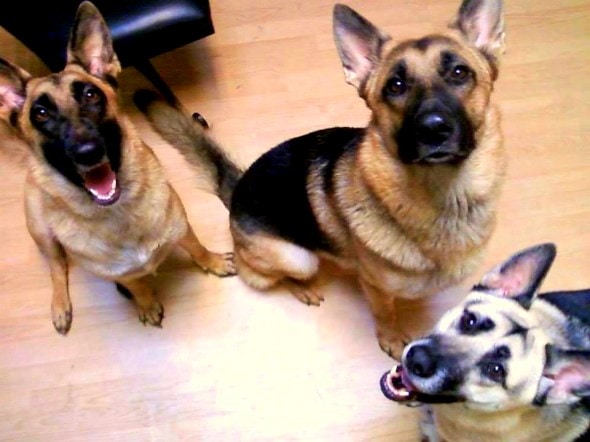 Because of the kindness of Life With Dogs fans, a German shepherd named Kane was able to receive much-needed surgery number one of two for hip dysplasia.  Without your help, he would still be waiting, confined in a crate to keep him from hurting himself.

One week ago we told you about Kane, who at three years old, was told by his vet that he had the worst hip dysplasia he had ever seen in a dog that age.  It was going to cost $4,000 for surgery, money that the Guffey family didn’t have.  So they started selling off whatever trinkets people would buy, and a family friend began an online fundraiser.

Josie’s Fund contributed $500, knocking the goal down to $3,500. When we posted Kane’s story, you amazing Life With Dogs fans donated nearly $2,500 in just a few short days!  Kane has now undergone one surgery and is recovering well.

His mom, Angela, has been posting updates on her dog’s Facebook page: 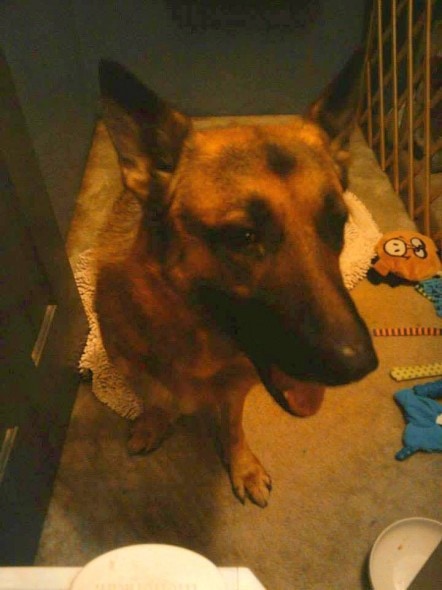 My baby is home!

Mom laid me out a nice thick rug to lay on but I just wadded it up and laid down beside it! I’m a brat like that sometimes. <wink> I must be pretty special though because I’m in the only dog free/hair free zone in the whole house (mom’s closet).  She moved everything to one side and put me up a couple of gates, like I would actually eat her clothes? I’M A GOOD BOY!

The staff said Dr. Crouch was very impressed with me and all the ladies there just fell in love with me.  See, told you I’m a good boy. I sure was glad to see my mom though – I was dragging the vet tech down the hall to get to her and when I did, boy was I whining and wallowing all over her!  She’s such a sucker when I ham it up like that! I think she felt guilty for leaving me there because when we got in the car she loved on me for 10 minutes and she had beef jerky and three new toys for me! 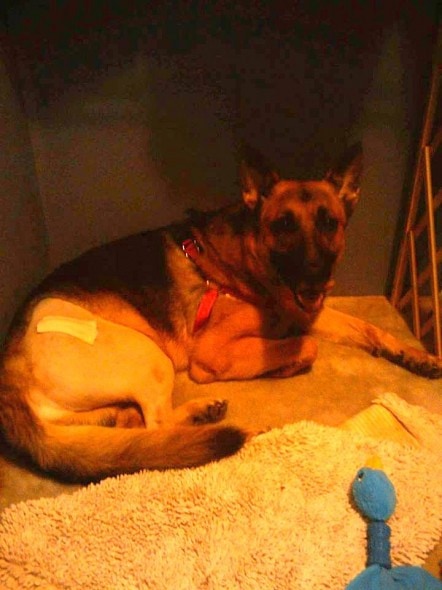 Day 2 at home….. Our big guy ate like a champ this morning and loves his meds, provided I hide them in raw hamburger balls so he thinks it’s a treat….lol.

He has done well with going potty but it’s hard to slow him down. Going up and down the steps has been the biggest challenge – he was terrified of them at seven weeks old and has tried to run up and down them instead of walk every day for the last three years.  I guess he thinks running will get it over with quicker!

We did the morning round of moving his leg through the normal range of motion for five minutes, which he did NOT like. He didn’t act as though it was hurting him but kept making it clear he would rather me pet him or him be in my lap.

I can’t count how many times we have laid the rug out flat and he wads it back up again and either lays beside it or on top of the big lump he has turned it into. 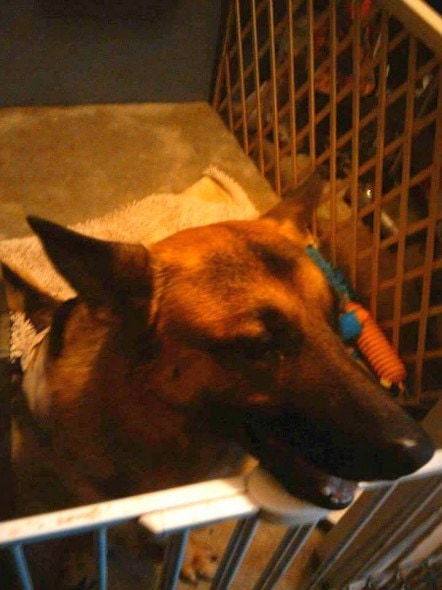 He is getting his pain meds and anti-inflammatory meds every 12 hours and has shown no real signs of pain at all so far. I haven’t given him any of the sedatives since he is staying pretty calm in his little protective den except when he realizes my son or I are coming in to snuggle or take him out to potty.

I hear the toys randomly squeaking from time to time and he’ll stand up to watch and grab a pat on the head if we go into the bedroom for any reason, but all in all he is doing very well.  Even when the others start barking he has figured out that I will close the bedroom door if he acts too curious so he’s staying relatively kicked back and watching the world go by.  God, I love this big guy!

Kane still needs one more surgery to get back on all four feet and back to being his active, happy-go-lucky self.  If you would like to make sure that happens, click here to donate.