Some people claim that they never forget a face.  They meet you once, and for whatever reason, they just remember you.  The same could be said for Rico.  He’s a dog that even after being separated from his humans for three years, instantly recognizes them the second they are reunited.

Rico had been a part of a nasty breakup, and Andrea Arce and her two daughters never thought they’d see him again.  However, as luck would have it, Rico was picked up and taken a shelter clear across the US as a stray.

Rico had been chipped, and the information on it was Andrea’s.  She was contacted and couldn’t believe what she was hearing.  She made plans straight away to have Rico flown home.

When she took her kids to the airport to pick him up, she hadn’t told either of her children what was going on.  It clear to see the surprise on their faces in the reunion video.

Rico knew immediately who he was looking at.  He was so overjoyed about seeing them again, he was beside himself.  Clearly, Andrea and her children were also very happy to have him back.

“It’s the connection that we had for the first three years of his life,” Arce told a local news outlet.  “We never forgot him and he never forgot us.” 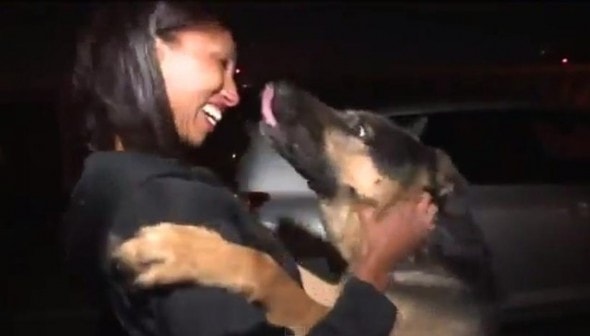 45 thoughts on “Dog Recognizes His Family After Three Year Separation”