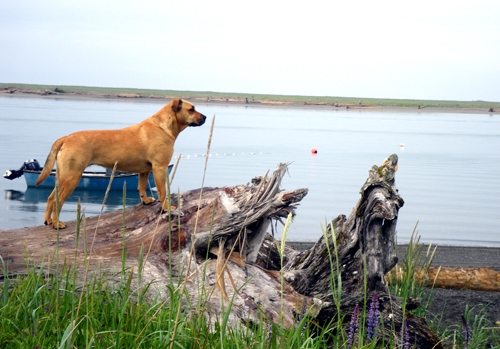 On January 4th, Tinaa, whose name means ‘copper’ in Tlingit, went for a walk in Yakutat, Alaska, like she did every day.  As always, she went alone, likely visiting apartments around the town’s community center, as she often liked to do.  She always came home, sometimes too full from handouts to eat her dinner.  But that night, when the pit bull/blue heeler mix didn’t come home, her family began to worry.

“I went out that night looking for her and I didn’t find her anywhere,” said owner Ron Buller.  “I figured she was just visiting someone, you know?”

Just before midnight, a 7.5-magnitude magnitude earthquake rocked southeast Alaska.  No one had seen Tinaa.  Buller hoped that perhaps she had sensed the impending quake, and found a safe place to hide.  The family waited, thinking she might come home once the chaos died down, but she still didn’t return.

Buller couldn’t stand the thought of losing her – Tinaa was given to him by his son, JP, to help ease the pain of losing his mother.  Buller was deeply depressed, but Tinaa helped him grieve and recover.  The thought that his precious dog may have been attacked by wolves or struck by a car and left to die on the side of the road was too much for him to bear.

The next evening, a neighbor called to tell Buller that someone could hear distant barking under a building.

Upon closer inspection, JP came across an abandoned well.  It was about four feet across, and 35 feet deep.  At the bottom stood a freezing cold Tinaa.  Minutes later, a 12-person rescue crew assembled to save the trapped dog.  JP was lowered into the well to pull her up.

After the dog was successfully raised, she was heaped with blankets.  Tinaa made intrepid efforts to climb up the well – her claws were scraped down and bloody.  She also contracted Giardia, an infection caused by parasites living in dirty water.  But she is receiving treatment and recovering from her ordeal.

“Oh I was totally relieved.  It’s a wonderful feeling,” Buller said.  “I was thinking to myself, ‘Oh man, I hope this isn’t the way the new year is starting out.’  What does it tell me?  It tells me that if you’re good people and you live a good, honest life, good things happen for you.  My wife said a lot of prayers, and she said it was the prayers, so I’ll have to give the prayers some credit too.”

Hopefully from now on Tinaa will keep closer to home, and Buller and his family will keep a closer eye on her.