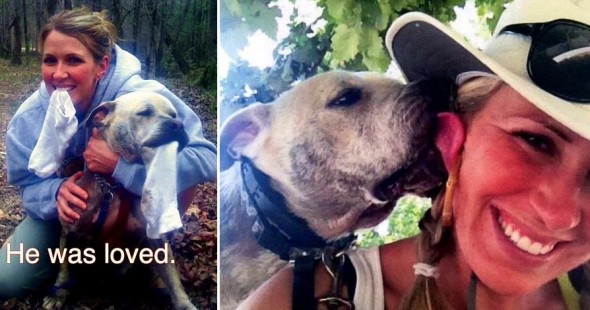 Back in 2005, during hurricane Katrina’s aftermath, a very special dog called Yogi was rescued.  He was found in a terrible state, and badly in need of medical attention.  Fast foreword to today, and Yogi has a loving forever home with a great family.

When Yogi was found, he was only seven months old.  He had an awful case of demodex mange, and was completely sunburned.  He was picked up and taken out of New Orleans by Dr. Jennifer Stobbe (lovingly referred to as Aunt Jen), and taken to her animal hospital in Mississippi.

Back at the animal hospital, Yogi became a bit of a fixture in the place.  Everyone there loved him, and he always seemed grateful for their care.  However, staff at the hospital really wanted him to get a forever home.  A good one with a loving family.  That proved to be a tougher task than assumed.

The staff worked tirelessly to get him a home, but six years would pass before he left the animal hospital.  In his time there, he saved many lives by being a blood donor, and everyone that met him, loved him.  Finally, Yogi was taken in by the Longmont Humane Society in Colorado.

After being at Longmont for a year and a half, Yogi came to the Best Friends Animal Society in Utah.  They had hoped to find him the home he needed.  As one could expect, the staff there fell in love with him as well.

So, where is Yogi?  How is he doing now?  Well, we’re happy to report that Yogi is living with a forever family that loves him very much.  A decade passed for this dog, with no home to call his own.  Now, he happily faces every new day with a smile on his face, and all of the people that have met him on his journey, couldn’t be happier for him.