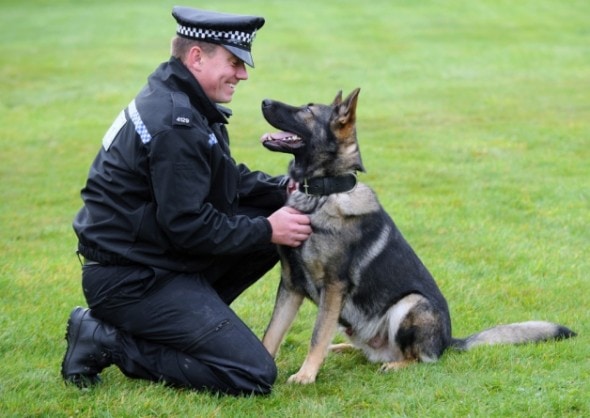 A dog named Chance is getting a second chance after being rescued from abusive owners. The German Shepherd just recently graduated from intensive training to become a police dog.

The abuse that Chance endured made him nervous and aggressive and the RSPCA struggled to find him a new family. They didn’t give up on him and a team of behavior experts worked with Chance, but it became apparent he would need a special kind of home.

“They worked really hard with him and saw some big improvements but he was still going to need a special type of home,” said Gena Cameron from RSPCA Leeds, Wakefield and District Branch.

The special type of home for Chance was realized when a police dog handler came to visit.

“It was agreed they would assess him with a view to him joining the force,” said Cameron.

Chance was assigned to PC Mick Kilburn whose previous dog was due to retire. Chance underwent a ten-week intensive training course and on Friday he graduated. He has been trained in tracking, searching, obedience and criminal work.

“I couldn’t be more proud of how well Chance has done,” said PC Kilburn. “I was delighted to be able to give him the chance he deserved and look forward to working with him, serving the communities of West Yorkshire.”