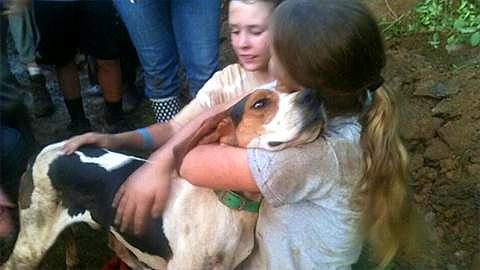 After being trapped in a cave in Kentucky for four days, a dog has been returned to his anxious family.

Rat the coonhound chased a raccoon into a cave and never came back out. The family tried for for days, but was unable to get to him because he had traveled into a small space underground.

On Friday, rescuers were given a new breath of hope when they heard the 15-month-old dog barking. A backhoe was being used to dig up a sinkhole, and that’s when Rat urgently barked to let everyone know he was still alive.

It took some time, but Rat was finally freed from his prison around 9 pm that night. His relieved and overjoyed family hugged their unconfined canine.

It is unknown how the pup managed to survive so long underground.