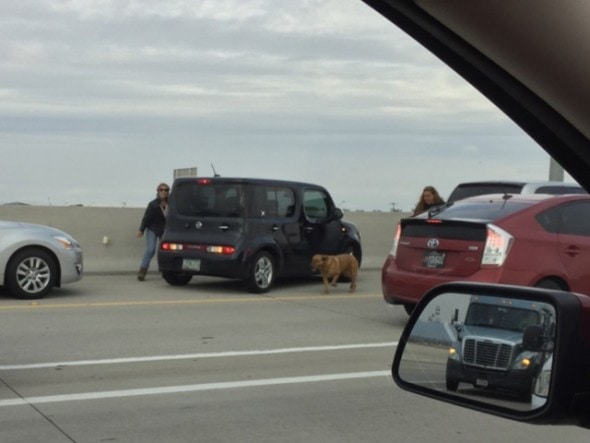 A Maricopa County Sheriff’s deputy and a few good Samaritans stopped what could have been a tragedy on Arizona’s busy I-10 freeway.  A dog was loose in traffic, weaving in and out of cars trying to escape.  They managed to get the dog off of the road and to safety before anything bad happened.

A sheriff’s deputy was responding to what he thought was a traffic accident.  Cars and trucks were backing up big time on the I-10, congesting traffic. Upon his arrival, he came across several people out of their cars trying to corral a large, brown dog running through traffic.

The officer stopped any more traffic from passing through the area, and the others helping got the dog into a car, and away from harm.  Many people on the road were trying their best to hold back oncoming traffic, a risky move on such a busy stretch of road.

No one, including the dog, was injured in the incident.  The dog was taken away to a local animal shelter, where he underwent a medical exam to ensure his health.  After it was determined the dog was physically unharmed, the hunt for his family is on.