When a man called David came across what he thought was a dead dog in the middle of the road, he could never have imagined the way that dog would touch his life forever.  After getting the dog out of traffic, he said that he stopped and said a little prayer and began to look up the number for animal control.  That’s were things got strange.

David wasn’t completely positive, but he could have sworn that this “dead dog” had just blinked.  She was not dead after all.  What was going to be a call to animal control to collect a dead body, quickly became a full-blown rescue effort.

She was rushed to an animal hospital immediately.  While there, it was discovered that she had in fact been hit by a car, and was suffering badly.  She had a broken femur, a broken pelvis, swelling on the brain, and had lost vision in both eyes.

No one gave the little dog very good odds on surviving the ordeal.  Doctors and surgeons worked tirelessly to do everything they could, but eventually it simply became a matter of time.  She spent a total of two weeks in the animal hospital, and then began her rehab.

The transformation that this little dog makes is simply miraculous.  Her journey through it all is simply amazing, and you just have to see it. 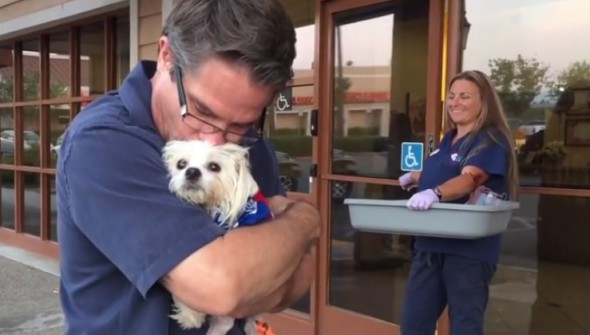