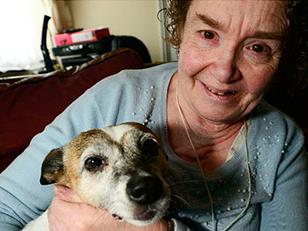 When 72-year-old Rosemary Field woke up early in the morning because her dog Barbie was licking her face, she initially told the dog to go back to sleep. Barbie wouldn’t let up though and when Mrs. Field opened her eyes she found that her bed was on fire.

A lamp had fallen on the bed in the middle of the night and set fire to Mrs. Field’s bed and carpet. Her Jack Russell terrier Barbie quickly ran to the elderly diabetic woman and licked her face to wake her up. “She usually sleeps on my bed but when she started licking my face so early in the morning I was quite annoyed,” said Mrs. Field. “It wasn’t until I woke up more that I saw the bottom of my bed was on fire.”

Mrs. Field tried to throw water on the fire, but she is a registered blind diabetic and with all the smoke she couldn’t see. So Mrs. Field called for help and grabbed Barbie, her other pets and brought them to safety. Her cat Tasha refused to leave.

The firefighters arrived to find the fire had been extinguished. Firefighters believe without Barbie they very well might have been dealing with a fatality. “They told me it was very lucky that Barbie had woken me up, or I might have slept through it and died,” said Mrs. Field, who can’t do enough to repay Barbie. “I’ve been giving her lots of treats since it happened.”